A journey through time with the OPAL natural gas pipeline 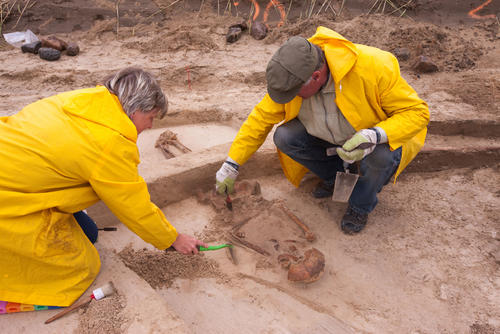 Kassel. They are the first forerunners of any new natural gas pipeline: long before the construction workers arrive, archaeologists set to work all along the pipeline route, probing the terrain for historic sites. After all, the construction work provides a unique opportunity to take a look beneath the Earth's surface. The 470-kilometer route of the natural gas pipeline OPAL (Ostsee-Pipeline-Anbindungs-Leitung – Baltic Sea Pipeline Link) is no exception and is currently being intensively probed for historic artifacts by preservationists in Mecklenburg-Western Pomerania, Brandenburg and Saxony. “Along the route between the Baltic Sea coast near Greifswald (the Nord Stream landing point) and the German-Czech border, staff from the respective state offices for historical monuments have identified a total of more than 280 excavation sites, which are now gradually being investigated in more detail,” explains Hans-Georg Egelkamp, OPAL Project Manager of the WINGAS Group. The investigations, which are fully financed by the group of companies, began about one year ago, after completion of the regional planning procedures. Since then, the archaeologists from the state offices for historical monuments have already discovered several valuable finds.

Staff from the Archaeological Heritage Service in Saxony are particularly proud of a wooden well, approximately 3000 years old, which they found near Kalkreuth, about 30 kilometers north of Dresden. “The wooden well is very well preserved and we were able to excavate it completely,” explains Dr. Christoph Steinmann, Director of Excavations. The well is currently being examined in the Archaeological Heritage Service's archive. The scientists hope to draw conclusions from the finds with regard to the way of life and the environmental situation in that era. A number of ceramic shards, found a few kilometers further north, are also of interest to the preservationists, as this member of the Archaeological Heritage Service's staff points out: “To date, the shards from Brockwitz are the oldest ever found in the Elbe Valley.” The shards originate from the time of Linear Pottery, which marked the beginnings of ceramics production more than 7000 years ago. People of the Stone Age, who used this clay crockery thousands of years ago, are said to have first settled here after coming from Bohemia. “It is unusual to discover a Neolithic settlement so close to the river,” says Steinmann. “Finds are more typically located to the left of the Elbe and mainly in the lateral valleys, somewhat further from the river.”

Clay shards which are thousands of years old

Also in Uckermark, near the municipality of Grünow, archaeologists have found clay shards which are thousands of years old. “The find of clay shards and animal bones from the Neolithic period, around 6000 years old, is one of the most extraordinary finds so far along the Brandenburgian section of OPAL,” explains Dr. Sabine Eickhoff, head of the department in charge at the Brandenburg State Office for the Preservation of Monuments. “This lends us valuable insight into everyday life at that time.” Dr. Eickhoff describes the find as the largest ensemble of its kind ever discovered in Brandenburg. The site of the find was in a depressed area, overlaid with remnants from the much-later Slavic period, which meant that it did not fall victim to erosion. “The site was never even disturbed by a plough,” adds Eickhoff, going on to say that neither moles nor mice had left any traces there either. The bones found on the site, from ancient breeds of cattle, pigs, sheep and goats, as well as from wild animals, are now being examined in more detail. The researchers hope that these bones will shed new light on early eating habits. “The cutting marks, for instance, allow us to determine how these people prepared their food,” says Eickhoff.

Near the town Bad Freienwalde, the archaeologists were surprised to find a circular earthwork, which was also built in the Neolithic period. “All that we previously new about the location of the find, was that an Iron Age settlement from around 800 BC was situated there,” reports Eickhoff, adding that this recently discovered circular earthwork, with four entrances via a trench and a wall, can be dated back to between 4200 and 4500 BC. According to Eickhoff, the construction of the pipeline offers archaeologists a special opportunity “to cut a longitudinal section through the entire country.” In Brandenburg, the archaeologists will be able to investigate a total of more than 200 archaeological sites. Some of the finds are to be scientifically analyzed in theses at the Free University of Berlin. Prospective excavation technicians at the University of Applied Sciences Berlin also want to address the theoretical issues of this subject matter.

The State Office for Culture and the Preservation of Historical Monuments in Mecklenburg-Western Pomerania is also taking the opportunity presented by the laying of OPAL, to conduct archaeological investigations. “Along the pipeline route in Mecklenburg-Western Pomerania, we have examined 85 subdivisions so far, discovering 35 particularly valuable sites in the process,” says Dr. Jens-Peter Schmidt from the State Office in Schwerin. “These are already being fully excavated prior to the pipe-laying work, so as to salvage and preserve them in as intact a state as possible. Shortly before construction, all remaining archaeological sites will then be examined in more detail.” The excavation director expects one or two more surprises from these works as well. Among the locations excavated so far, a number of sites near Wrangelsburg, south of Greifswald, are valued particularly highly by this archaeologist. “Here, we found a settlement cluster from the Roman Iron Age, dating back to between the years zero and 370 AD.”
The investigation areas along the OPAL pipeline are of great significance to archaeological research, because “they grant an insight into almost all aspects of daily life,” as Schmidt describes it. For instance, a large excavated burial area near Steinfurth, with 72 cremation burials from the Early Bronze Age and the Iron Age, as well as 14 Early Slavic inhumation graves, bear witness to the conventions and rites of those times. Near Pasewalk, the well-preserved wells and furnaces from the Pre-Roman and Roman Iron Ages also convey a great deal of information. The finds on the southern bank of the Peene in Butzow, near Anklam, tell their very own story: the excavation of one section, amounting to almost two hectares, unearthed 340 pits from the Neolithic period and from the time of the Slavs, but in particular from the Early Bronze Age, much to the delight of Jens-Peter Schmidt: “Here, we found numerous remnants of casting molds and crucible fragments. Finds of this kind are otherwise extremely rare and they prove that a bronze founder was once active in Butzow.”

With a capacity of 36 billion cubic meters of natural gas and a length of around 470 kilometers, the OPAL pipeline is one of Germany's biggest energy infrastructure projects of recent years. The pipeline will connect the Nord Stream natural gas pipeline (which runs through the Baltic Sea) with the European natural gas pipeline system and will run from Lubmin near Greifswald, through Mecklenburg-Western Pomerania, Brandenburg and Saxony, all the way to the Czech Republic. The pipeline is to be built by WINGAS, as commissioned by OPAL NEL TRANSPORT GmbH and E.ON Ruhrgas AG. The pipeline is planned to go into operation in fall 2011.


WINGAS GmbH & Co. KG is a European energy company and has natural gas trading and sales activities in Germany, Belgium, France, the United Kingdom, Austria, the Czech Republic, and Denmark. Its customers include municipal utilities, regional gas suppliers, industrial firms and power plants. Since 1990 WINGAS has invested more than 3 billion euros in the development of its own natural gas transport and storage infrastructure. The WINGAS TRANSPORT pipeline network, which is over 2,000 kilometers long, connects the major gas reserves in Siberia and the natural gas fields in the North Sea to the growing markets in Western Europe. In Rehden in North Germany, WINGAS has the largest natural gas storage facility in Western Europe – with a working gas volume of over four billion cubic meters – and it is also a partner in the second-largest storage facility in Central Europe situated in Haidach in Austria. Furthermore, additional natural gas storage facilities are currently being built in Great Britain and Germany in order to secure the supply of natural gas in Europe.