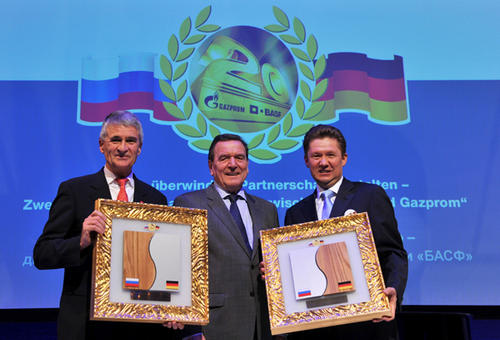 Berlin. BASF and its oil and gas subsidiary Wintershall commemorated 20 years of German-Russian economic history together with Gazprom at an anniversary event in Berlin. The companies laid the foundations for their cooperation in fall 1990 with a long-term agreement to market Russian natural gas in Germany. Together with more than 200 guests, Dr. Jürgen Hambrecht, Chairman of the Board of Executive Directors of BASF SE, and Alexey Miller, Chairman of the Management Committee of OAO Gazprom, celebrated the anniversary of the successful and pioneering economic cooperation. Today, the partnership between the world's leading chemical company and the world's largest producer of natural gas extends from the exploration and production of natural gas in West Siberia to transportation through the Nord Stream pipeline and the sale of the natural gas in Germany and Europe by the jointly owned natural gas trading company WINGAS. The German-Russian cooperation was unprecedented in the gas industry in 1990. What began with a shared declaration of intent on cooperation in the gas sector shortly before the reunification of the two German states has now grown into a solid and equal partnership. "From today's perspective, the cooperation represents a historic step towards securing Europe's energy supply," said BASF Chairman Hambrecht. "When Gazprom and BASF signed the first agreements at the beginning of the 1990s, hardly anyone could have imagined how successful this partnership would become. Today we are very proud of what we have accomplished and can look to the future with optimism. After all, there is still a great deal we intend to achieve together," Hambrecht continued. "The two decades of partnership between Gazprom and Wintershall exemplify the success of cooperating in business. Over the years we have solved more than one difficult task: we have begun developing the difficult-to-access Achimov deposit of the Urengoy reservoir and we are building the Nord Stream gas pipeline, which is important for the European market," said Gazprom Chairman Alexey Miller. "We now work along the entire value creation chain - from production through to sales. Our relationship is based on mutual trust and appreciation. Our employees and business partners are increasingly becoming good friends. I firmly believe that new success stories lie ahead of us, and just as many outstanding and interesting projects," Miller explained.

Cooperation that serves as a role model

Rainer Brüderle, the Federal Minister for Economics and Technology, describes Russia as an important partner for the supply of gas. "The reasons for this are obvious: Russia lies practically on our doorstep. Russia is our strategic partner. The Nord Stream pipeline strengthens our trade relations with Russia," Brüderle said. "The cooperation between BASF and Gazprom serves as a role model. It can encourage other energy companies to undertake additional German-Russian projects." Guest speaker and former German Chancellor Gerhard Schröder congratulated BASF and Gazprom on the successful cooperation and likened the corporate partnership to a perfect blueprint for a successful partnership between Germany/Europe and Russia. "In Europe we should strive to create the closest possible economic and political ties with Russia". This would create trust, security and stability for the future, added Schröder. "Russia plays a central role in how we secure the energy supply in the global context."

Supply security by engaging directly at the source

Gazprom and BASF/Wintershall: partners since 1990

One of the routes the Russian gas will take will be through the Nord Stream pipeline in the Baltic Sea, which has been under construction since April 2010. This pipeline connects the Siberian gas reserves directly with Germany. Over 600 kilometers of the 1,220-km-long pipeline have already been laid, including the sections off the coast of the island of Gotland, and the sections where the pipeline comes on land in Germany and Russia. The first leg of the pipeline is scheduled to come on stream in October 2011. Construction of the connecting pipeline, OPAL, which will run from the German Baltic Sea coast to the Czech Republic, is also progressing on schedule. About 400 of the 470 kilometers of pipes have already been laid. The second connecting pipeline, NEL, from the German Baltic Sea coast to Rehden in Lower Saxony is currently in the planning approval process. Gazprom and the wholly owned BASF subsidiary Wintershall have already been active in natural gas trading in Germany and other European countries since 1990 via the German-Russian joint ventures WIEH, WIEE and WINGAS. This makes Wintershall one of the largest German importers of Russian natural gas. The jointly owned natural gas trading company WINGAS alone has sold more than 250 billion cubic meters of natural gas since it was founded.


BASF is the world's leading chemical company: The Chemical Company. Its portfolio ranges from chemicals, plastics, performance products, agricultural products and fine chemicals as well as oil and gas. As a reliable partner BASF helps its customers in virtually all industries to be more successful. With its high-value products and intelligent solutions, BASF plays an important role in finding answers to global challenges such as climate protection, energy efficiency, nutrition and mobility. In 2009 BASF posted sales of more than € 50 billion and employed around 105,000 staff at year end. BASF shares are traded on the stock exchanges in Frankfurt (BAS), London (BFA) and Zurich (AN). Further information on BASF is available on the Internet www.basf.com.

OAO Gazprom is the world's leading natural gas company specializing in the exploration, production, transport, storage, processing and marketing of natural gas and other hydrocarbons as well as energy generation. Gazprom's gas reserves are estimated at 29 TCM, i.e. around 70% of Russia's and 18% of the world's gas reserves. Gazprom is responsible for around 80% of Russian and 15% of global natural gas production. Gazprom has a 26% share of gas supplies on the European market and exports to 31 countries. Further information is available on the Internet at www.gazprom.com.

Wintershall, based in Kassel, Germany, is a wholly owned subsidiary of BASF in Ludwigshafen. The company has been active in the exploration and production of crude oil and natural gas for over 75 years. Wintershall deliberately focuses on selected core regions, where the company has built up a high level of regional and technological expertise. These are Europe, North Africa, South America, as well as Russia and the Caspian Sea region. In addition, these operations are complemented by the company's growing exploration activities in the Arabian Gulf. The company employs more than 2,000 staff from 35 nations and is now Germany's largest crude oil and natural gas producer. With its jointly owned subsidiaries with Russia's Gazprom, WINGAS and WINGAS TRANSPORT, the BASF subsidiary is also an important gas supplier on the German and European market. Further information on Wintershall is available on the Internet at www.wintershall.com.