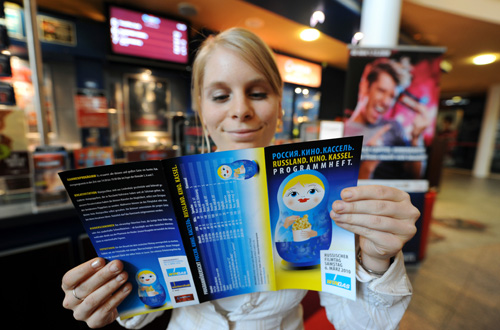 Kassel. Just a few days before the awards ceremony in Los Angeles, current and previous Oscar-nominated Russian films will be shown on cinema screens in Kassel (at the Cineplex Capitol). With its film festival “Russia. Cinema. Kassel.”, the German-Russian natural gas company WINGAS will be presenting award-winning cinema highlights, audience favorites as well as children’s and documentary films from the largest country in the world to a broad public for the first time on Saturday, 6 March. One of the highlights of the festival is the premiere of Walt Disney’s first Russian production, “The Book of Masters”, in the afternoon. The children’s film (age 8 and over) tells the story of the stonecutter Ivan who battles against the terrifying reign of the Stone Countess. The Russian production elegantly combines traditional Russian storytelling with modern fantasy elements. Other new Russian films, such as the offbeat “Ballada”, which examines the significance of the Lada in Russian daily life, will celebrate their premiere at the film festival. The wide-ranging program also contains award-winning comedies such as “Tulpan” and the psychological thriller “12”. Thirteen films in total will be shown on three separate cinema screens. On Saturday evening Oscar-winning actress Helen Mirren shines in the literary adaptation “The Last Station” as the wife of “War and Peace” author Leo Tolstoy. Unsurprisingly, the English actress has once again been nominated for an Oscar for her performance in this film.

“Russian cinema has many gems to offer which remain largely unknown to the public in this country. We want to bring these films to the public with the Russian Film Festival,” WINGAS Chairman Dr. Gerhard König said explaining his company’s initiative. “As a German-Russian company, we are particularly interested in promoting cultural understanding between the two countries”. In addition to many film showings, “Russia. Cinema. Kassel.” also offers a special children’s program on Saturday afternoon. Children will have the opportunity to paint and design their own linden wood matryoshka dolls at creative stations. A photo studio will also be set up especially for the event with special tricks to give the young guests a photo to remember.