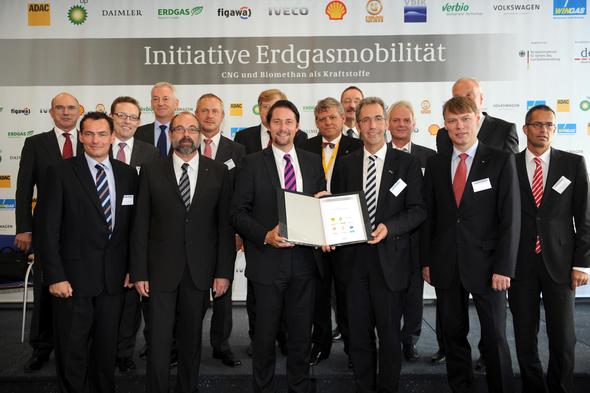 Kassel/Brussels. The North European Pipeline NEL adopts a more European stature: Fluxys G has now acquired from WINGAS a 19% stake in the Nord Stream connecting pipeline. The NEL link is one of the two pipelines planned in Germany for accommodating downstream flows from the Nord Stream pipeline which is going to bring additional volumes of Russian natural gas through the Baltic Sea to Europe. Following the signing of this agreement, the NEL ownership is composed of WINGAS 51%, Gasunie 20%, Fluxys G 19% and E.ON Ruhrgas 10%. The planned investments for the pipeline project are approximately at €1 billion.

Walter Peeraer, Chief Executive Officer of Fluxys G: “We are pleased to join this consortium for the construction of additional import capacity and to contribute to the security of supply of Europe and to the integration of the North-Western European natural gas market. We already have a stake in the Dunkirk LNG terminal project and stakes in the BBL and Interconnector pipelines linking the European continent to the UK. The participation in the NEL pipeline is a next step in our strategy to link different trading places in North-Western Europe.”

Dr. Gerhard König, Chairman of WINGAS: “Together with the Nord Stream Baltic Sea Pipeline, as a connecting pipeline NEL will transport Russian natural gas to the customers in western Europe and thus play a key role in ensuring a secure supply of natural gas. NEL was always intended as a European project. The participation of Fluxys G strengthens the European orientation of the project significantly.”

The NEL pipeline will run from the Nord Stream landfall point in Lubmin near Greifswald to Rehden in Lower Saxony, stretching over 440 kilometers past Schwerin and Hamburg. It will connect Nord Stream with the European gas network, just as the OPAL natural gas pipeline does to the Czech Republic. Natural gas from the major reserves in Russia can thus be transported directly to Germany and other Member States of the European Union, in particular to Belgium, the Netherlands, France and the UK. The construction works of the pipeline have started in spring this year. The pipeline is scheduled to come on stream in autumn 2012.


As a transmission infrastructure company operating on the North-Western European natural gas market, Fluxys G contributes to the enhancement of security of supply and the well-functioning of the market by promoting cross-border natural gas flows and transfers in that region.
In Belgium, Fluxys G builds and operates infrastructure for natural gas transmission, natural gas storage and terminalling of liquefied natural gas. To that effect, Fluxys and Fluxys LNG are appointed as independent system operators in Belgium. In view of their activities of general economic interest, both companies aim to set competitive tariffs and reinforce the role of the Fluxys grid as a natural gas crossroads with a view to safeguarding security of supply and improving the functioning of the market.
To foster the integration of the North-Western European natural gas market, Fluxys G develops a profitable set of stakes in and industrial partnerships with companies in the business of natural gas transmission and storage, terminalling of liquefied natural gas and spot market facilitation.
Safety, efficiency, sustainability and profitability are at the centre of our approach.
www.fluxysg.com

WINGAS is one of the largest suppliers of natural gas in Germany. The energy company is active in natural gas trading across Europe – in Belgium, Denmark, France, Great Britain, Austria, the Netherlands, and the Czech Republic. Its customers include municipal utilities, regional gas suppliers, industrial firms and power stations. WINGAS companies also market transport and storage capacities, as well as fiber-optic capacities for telecommunications. Since 1990 the WINGAS Group has invested about 4 billion euros in developing the energy infrastructure. Its storage facilities make the WINGAS Group one of the largest storage facility operators in Europe. This includes the natural gas storage facility in Rehden in North Germany, which is the largest natural gas storage facility in Western Europe. The approximately 2,700-kilometer-long pipeline network of the subsidiaries WINGAS TRANSPORT GmbH and OPAL NEL TRANSPORT GmbH connects the major gas reserves in Siberia and the North Sea to the growing markets in Western Europe.