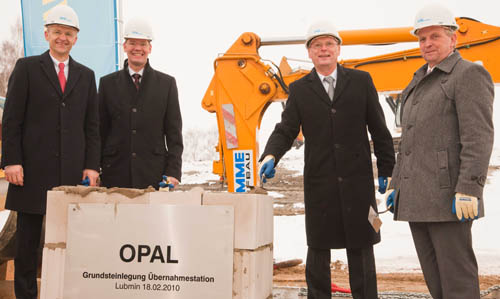 Lubmin. The foundation stone has been laid for one of the largest infrastructure projects in Europe – the construction of the OPAL, the 470-km-long natural gas pipeline in East Germany. Together with the Minister for Agriculture, the Environment and Consumer Protection of Mecklenburg-Vorpommern, Dr. Till Backhaus, and State Secretary Jochen Homann from the Federal Ministry of Economics and Technology, WINGAS Chairman Dr. Gerhard König and Hans-Peter Floren from E.ON Ruhrgas launched the construction work for the OPAL natural gas transfer station in Lubmin on the Baltic Sea coast on Thursday (18 February). Up to 55 billion cubic meters of natural gas a year will arrive in Lubmin in future from the Nord Stream Baltic Sea pipeline. The natural gas will then be transported from the transfer station to onward destinations via two connecting pipelines. The construction work for the OPAL (Ostsee-Pipeline-Anbindungs-Leitung – Baltic Sea Pipeline Link) is already underway: as many as 2,500 workers will work on the pipeline construction until the pipeline’s planned commissioning in October 2011. The pipeline will run from the Baltic Sea coast through Mecklenburg-Vorpommern, Brandenburg and Saxony to the Czech Republic. In addition to the OPAL pipeline, construction of the NEL (Norddeutsche Erdgasleitung – North German Gas Link) has been planned: the NEL will run from where the Nord Stream pipeline comes on land and pass by Schwerin and Hamburg until reaching the natural gas storage facility in Rehden in Lower Saxony. Rural regions in the North and East of Germany will also receive fast Internet connections with the construction of the two pipelines as modern fiber optic cables will be laid beside the natural gas pipelines.
“The Baltic Sea pipeline provides direct access to the world’s largest natural gas reserves, and Mecklenburg-Vorpommern will profit from this too,” Minister Dr. Till Backhaus said, welcoming the companies’ investments. “We hope to gain two things from the pipeline projects: that jobs will be created from the pipeline construction, and that Lubmin will become a more important center of industry,” Backhaus explained. State Secretary Jochen Homann underlined the importance of a secure energy supply at the stone-laying ceremony. “Investments like the Nord Stream Baltic Sea Pipeline and the OPAL connecting pipeline don’t just secure Germany’s energy supply, they also secure Europe’s.”

Overall more than two billion dollars are earmarked for investment in the expansion of the German natural gas infrastructure as part of the continuation of Nord Stream. More than a third of this sum will be invested in Mecklenburg-Vorpommern alone. In addition to the construction of the natural gas transfer station in Lubmin, more than 340 kilometers of pipes are set to be laid for the OPAL and the NEL in Mecklenburg-Vorpommern alone,” WINGAS Chairman Dr. Gerhard König explained. Mecklenburg-Vorpommern will become an increasingly important region for the European energy sector in the years to come. “Gas production in Europe is declining steadily, which means that more gas will have to be imported in future. European supply security is a challenge, but it can be met; with projects like the Nord Stream Baltic Sea pipeline and the OPAL natural gas pipeline,” Dr. König continued, and praised the constructive cooperation with the state authorities in Mecklenburg-Vorpommern as well as the authorities in Lower Saxony, Saxony and Brandenburg: “Ambitious projects like these can be realized when the right conditions are in place.”

Building permit granted for the south of Brandenburg

The construction work for the OPAL is progressing well despite the sometimes adverse weather conditions: since the beginning of the initial preparatory measures, the topsoil has been removed from around 170 kilometers of the pipeline route; almost 50 kilometers of pipes have been welded and around 20 kilometers of the pipeline string have already been laid. Coinciding with the laying of the foundation stone for the natural gas transfer station in Lubmin, the State Office for Mining, Geology and Raw Materials (LBGR) in Cottbus has issued the permit for the construction of the OPAL in the south of Brandenburg. Thrilled at receiving the permit documents, Bernd Vogel, Managing Director of OPAL NEL TRANSPORT GmbH, said, “With planning approval now granted for the southern section in Brandenburg, we now have all the important permits.” OPAL NEL TRANSPORT GmbH is a company of the WINGAS Group and will be responsible first and foremost for the technical network operations of the OPAL. “All the conditions are now in place for building the approx. 470-kilometer-long pipeline between Lubmin and Olbernhau (on the German-Czech border) on schedule and for transporting the natural gas from the Nord Stream pipeline to other destinations.” With a diameter of 1.4 meters, the OPAL is the largest natural gas pipeline to be laid in Europe. The pipeline is being built by WINGAS on behalf of OPAL NEL TRANSPORT GmbH and E.ON Ruhrgas AG.

OPAL NEL TRANSPORT GmbH will perform the tasks of network operator for the OPAL. The company is part of the WINGAS Group. It is planned that the OPAL will be connected to the WINGAS TRANSPORT gas pipeline network.
www.opal-pipeline.de