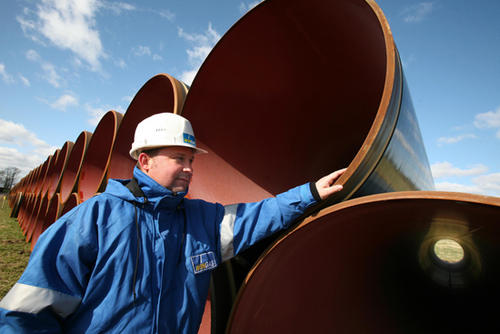 Dresden/Kassel. The OPAL natural gas pipeline (Ostsee-Pipeline-Anbindungs-Leitung – Baltic Sea Pipeline Link) is coming: following the planning approval notices for Mecklenburg-Western Pomerania and the southern section of Saxony, the county authorities in Dresden have now granted the permit for a section of the pipeline about 50 kilometers long in northern Saxony. This means that apart from the planning approval for Brandenburg, all the permits have now been issued. “We are confident that the approval processes in Brandenburg will also be concluded by the beginning of next year,” Bernd Vogel, Managing Director of OPAL NEL TRANSPORT GmbH, said. In the meantime the first preparations for the construction of the pipeline route have begun in Mecklenburg-Western Pomerania and Saxony. “The route is currently being cleared and the first layers of earth are being removed for the subsequent excavation of the pipe trench,” Mr Vogel explained. “We expect the welding of the first pipes, and thus the start of construction, to begin in October.” OPAL NEL TRANSPORT is part of the WINGAS Group and will be responsible for the OPAL network operations. The pipeline is scheduled to become operational in autumn 2011.

The first planning approval notice granted by the county authorities in Dresden applies to the section between Weißig am Raschütz, which lies on the state border between Saxony and Brandenburg, and the town of Wilsdruff south of the A 4 Autobahn. From here the natural gas pipeline will continue to the Czech Republic passing by Freiberg and Olbernhau. The county authorities confirmed in their planning approval that the project fulfilled the purpose of the Energy Management Act (EnWG) to facilitate the most secure, low-cost, consumer-friendly, efficient and environmentallyfriendly grid-bound supply of the general public with gas, and that it was in the public’s best interests. “The particular importance of the project in securing the energy supply in the Free State of Saxony and in the Federal Republic of Germany overall is beyond doubt for the planning approval authorities.”

The Economics Ministry of Mecklenburg-Western Pomerania described the permit granted a few days previously by the authority responsible, the State Mining Office in Stralsund, as an important step in the expansion of the transport capacities for natural gas and in ensuring more supply security for Germany and Europe with Russian natural gas. The planning approval notice concerns the 105-km section of the natural gas pipeline in Mecklenburg- Western Pomerania. “The construction of the OPAL conforms to the aims of the Energy Management Act (EnGW) to a large degree,” the State Mining Office in Stralsund said explaining its decision to approve the natural gas pipeline. The approval was subject to a thorough examination of the planning documents and the objections raised by authorities, associations and individuals.
The individual approval processes focus particularly on the environmental compatibility of the project. “In order to keep the impact on the environment to an absolute minimum, nature conservation was an important aspect of the planning for the OPAL from the very outset,” OPAL project manager Hans-Georg Egelkamp explained. “A pipeline doesn’t always take the shortest route from start to finish. Rather, the route is decided during an intensive dialog with the competent authorities, land owners, municipalities and environmental associations.”

This was the conclusion of a survey conducted recently by the public opinion research institute Emnid in the districts the natural gas pipeline will cross through. In all three federal states, the great majority of the population believes the key consideration is the important contribution the OPAL will make to increasing supply security in Germany. Overall 1,000 residents were interviewed. Almost two thirds of those asked (58%) thought the energy supply in Germany would be secured long-term. In a similar survey in 2008 this figure was 52%. 75 percent of those interviewed (2008: 68 %) believe the Baltic Sea pipeline will make a key contribution to improving the energy supply in Germany and 64 percent (2008: 58%) think their own federal state will benefit from the pipeline link. About 70 percent (2008: 56%) recognize that the OPAL is necessary for boosting the competitiveness of their own state.

Note to editors and photo editors: The full Emnid survey and the slides are available at www.opal-nel-transport.de and www.opal-pipeline.de.