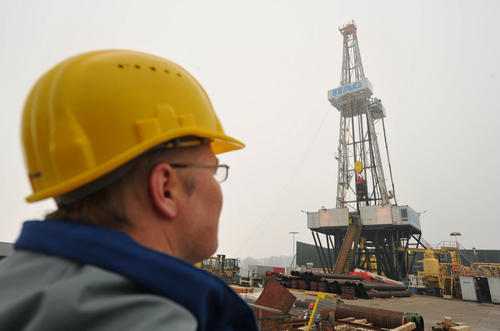 Jemgum. The construction of the natural gas storage facility in Jemgum, East Frisia, on the German-Dutch border is making good progress, with the storage facility scheduled to go into operation in 2013. "The construction work is proceeding according to schedule. After beginning with construction in the summer of 2008, we have already completed a large section of the building work," WINGAS Project Manager Arkadius Binia explained at a citizens information event in Jemgum. "We are confident that the first gas for filling the caverns will flow at the beginning of 2013," Ralf Riekenberg explained. He is coordinating the project in the district of Leer for EWE ENERGIE AG from Oldenburg. Overall, EWE and WINGAS are planning to build up to 33 caverns in the salt dome in Jemgum. Much of the infrastructure, such as the substation, the discharge structure, the pump station as well as a brine transport pipeline over 40 kilometers long from Jemgum to Rysum on the North Sea coast, is now complete. "We have already begun with the construction of the first gas plant building as well," Riekenberg said. The company is celebrating the laying of the foundation stone today (Thursday, 16 December). EWE began the construction work for the gas operations in the summer of this year with the deep foundations.

While the natural gas storage facility is becoming increasingly visible at the surface, underground the first wells have been successfully completed too. "With the first part of the drilling campaign complete, we have now begun with the cavern wells from the next well site," Arkadius Binia explained. The next five wells for the WINGAS cavern storage facility will be drilled from here. "This is the optimal way to use the salt dome," the WINGAS Project Manager explained. At the same time, the energy company from Kassel has prepared the approval process for laying a natural gas pipeline about 14 kilometers long from Jemgum to Oude Statenzijl. "With this pipeline our storage facility will be connected directly to the Dutch natural gas pipeline system," Binia explained. "This will enable us to supply customers in the Netherlands quickly and reliably too." The pipeline is scheduled for construction in the summer of 2012.

EWE has already drilled eight wells successfully and began with the solution mining process mid-February. The company is currently applying the process to create six caverns. The volume of the hollow space created so far is 350 000 cubic meters.

Background: In order to create a cavern, the salt in the dome has to be dissolved and rinsed out. The solution-mining process required for this takes about two years. Filling the caverns with gas for the first time requires another year. "We intend to build up to 15 caverns with a volume of up to 700,000 cubic meters each," EWE Project Manager Riekenberg explains. WINGAS will initially construct up to 18 caverns with a geometric volume of up to 750,000 cubic meters each. The two storage facilities are being developed together, but will be operated independently by the two companies upon completion.

WINGAS is one of Germany's largest suppliers of natural gas. The energy company is active in natural gas trading across Europe: in Belgium, the Czech Republic, Denmark, France, the Netherlands and the UK. Its customers include municipal utilities, regional gas suppliers, industrial firms and power plants. The WINGAS companies also market transport, storage and fiber-optic capacities and operate gas pipelines and storage facilities. Since 1990 the Group has invested more than 3 billion euros in the development of a natural gas transport and storage infrastructure. Its storage facilities make the WINGAS Group one of the largest storage facility operators in Europe. This includes the natural gas storage facility in Rehden in North Germany, which is the largest natural gas storage facility in Western Europe. The pipeline network of the subsidiaries WINGAS TRANSPORT GmbH and OPAL NEL TRANSPORT GmbH, which stretches over 2,000 kilometers, connects the major gas reserves in Siberia and in the North Sea to the growing markets in Western Europe.

EWE ENERGIE AG, based in Oldenburg, is a modern energy services provider traditionally active in the region between the Ems and Elbe rivers, as well as in Brandenburg, North Pomerania and on the island of Rügen. The company provides around one million electricity customers and over 700,000 natural gas customers with a reliable and low-cost supply of energy. With more than 110 regional and local branches, EWE focuses on providing a personal service to its customers locally, thus underlining its commitment to the region. It offers a broad range of products and services, from green electricity to biogas as well as energy services such as the planning, set-up and economically efficient operation of heating systems. As such, EWE provides classic and innovative energy services for households, industry, utility companies and municipalities from a single source. EWE ENERGIE AG has drawn on its many years of experience in supplying electricity and gas to enter the renewable energies sector too. Furthermore, the company is also active in the gas storage segment and is continuously strengthening its market position in this area.