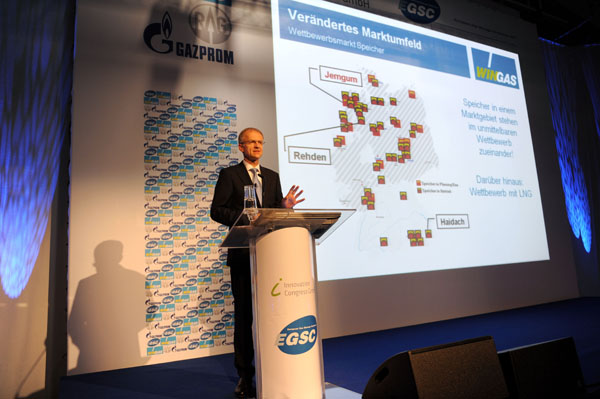 Straßwalchen, 19 May 2011. After just two years of construction, the energy companies RAG, WINGAS and Gazprom have completed the expansion of the Haidach natural gas storage facility near Salzburg. With a capacity of over 2.6 billion cubic meters of natural gas*, the Haidach storage facility is the second-largest gas storage facility in central Europe - the storage volume equals about a quarter of Austria's annual gas requirements. "One of the major challenges relating to the energy supply is our ability to store energy," Markus Mitteregger, CEO of the Austrian company Rohöl-Aufsuchungs Aktiengesellschaft (RAG), said at the official inauguration attended by numerous political representatives and members of the business community. "Gas storage facilities are the energy storage systems of the future. By using the former gas reservoir at Haidach as an underground gas storage facility in a sustainable manner we are now making a key contribution to Europe's supply security." The three companies have invested a total of 300 million euros in the past few years in developing the storage facility, which is operated by RAG.

"Gas storage facilities are crucial to securing the energy supply in Europe. Major investments are required to expand this infrastructure. The Haidach storage facility is a prime example of strong partners in the energy industry combining their different areas of expertise and realizing a project such as this one together successfully," WINGAS Chairman Dr. Gerhard König said. WINGAS is one of the largest suppliers of natural gas in Germany. "The expansion of the Haidach storage facility is an important element in developing the increasingly integrated European gas markets," König continued. "Expanding the UGS network in Europe and building up storage capacities will enable Gazprom to trade extra gas amounts as well as to make a tangible contribution to reinforcing the regional energy security. Located in the heart of Europe, the Haidach UGS facility is a particularly successful project of the kind", said Alexander Medvedev, Deputy Chairman of the Management Committee.

Gas storage facilities are crucial for a secure energy supply

By using the natural gas reservoir as underground gas storage, the three companies are investing in the most efficient, environmentally friendly and safest way of storing natural gas.  The reservoir rock in Haidach is unusually deep, in some parts over 100 meters, and extends over 17.5 square kilometers. "Due to the high permeability of the reservoir rock, around one million cubic meters of natural gas can be injected into and withdrawn from the storage facility per hour," Markus Mitteregger explained. Across Europe there are only a handful of gas reservoirs with such ideal conditions for gas storage like the one in Haidach. RAG discovered the Haidach gas reservoir in 1997 as a porous sandstone reservoir located at a depth of 1,600 meters. Holding a total gas in place of 4.3 billion cubic meters, the Haidach reservoir was one of the largest gas finds in Austria. The first stage of construction was commissioned in 2007 with a capacity of 1.2 billion cubic meters of natural gas. The recently completed expansion began in 2009. RAG, WINGAS and Gazprom each hold a third of the storage facility.

Natural gas storage facilities play a key role in securing the supply of natural gas - they make the stable availability of this environment-friendly energy in the required quantities possible. They manage to balance the fluctuations in consumption with the need for a steady supply of gas. Thanks to gas storage facilities it is possible to balance out seasonal and daily fluctuations in consumption. Natural gas is produced consistently throughout the year in approximately the same amounts and sometimes transported over long distances. However, the energy consumption of industry, power stations and households varies from season to season and depending on the time of day. Consumption is much higher in winter and during the day than in summer and at night. Since the European Union will have to import increasing quantities of natural gas in future to cover demand, there is also a growing need for additional storage capacities.

Natural gas is the energy of the future

To achieve the ambitious climate protection goals of the European governments, natural gas will have to play a particularly important role in the future energy supply: for natural gas is the most environmentally friendly fossil fuel with the lowest emissions. Furthermore, in contrast to wind and solar energy, it can be stored, which means it is available at all times, and allows renewable energies to be used in combination with highly efficient gas-fired power stations to provide a secure energy supply.

*At a temperature of 0 degrees Celsius


WINGAS is one of Germany's largest suppliers of natural gas. The energy company is active in natural gas trading across Europe: in Belgium, the Czech Republic, Denmark, France, the Netherlands and the UK. Its customers include municipal utilities, regional gas suppliers, and large-scale industrial users. WINGAS companies also market transport, storage and fiber-optic capacities and operate gas pipelines and storage facilities. Since 1990 the Group has invested more than 4 billion euros in the development of a natural gas transport and storage infrastructure. Its storage facilities make the WINGAS Group one of the largest storage facility operators in Europe. This includes the natural gas storage facility in Rehden in North Germany, which is the largest natural gas storage facility in Western Europe. The pipeline network of the subsidiaries WINGAS TRANSPORT GmbH and OPAL NEL TRANSPORT GmbH, which stretches over 2,700 kilometers, connects the major gas reserves in Siberia and in the North Sea to the growing markets in Western Europe.

Gazprom is one of the world's largest energy companies. Its major business lines are geological exploration, production, transportation, storage, processing and marketing of hydrocarbons as well as generation and marketing of heat and electric power. Gazprom's mission is to ensure maximally efficient and balanced gas supply to Russian customers and reliably fulfill long-term gas export contracts. Gazprom's richest resources of natural gas account for 18% and about 70% of the world's and Russian gas reserves, respectively. Gazprom produces about 15% of the world's natural gas; the company's share in the Russian gas production market is about 80%. www.gazprom.com

Rohöl-Aufsuchungs Aktiengesellschaft (RAG) is the longest-standing exploration and production company in Austria. Its core areas of business consist of searching for and producing natural gas and crude oil as well as natural gas storage. RAG operates gas storage facilities including the storage facility at Haidach (Salzburg/OÖ), the largest natural gas storage facility in Europe. With a storage capacity of about five billion cubic meters from April 2011, RAG is making a key contribution to supply security in Austria and the whole of central Europe. Since the company was founded it has produced more than 15 million tons of crude oil and more than 27 billion m3 of natural gas. Today RAG employs around 400 members of staff. The company sells approximately 600 million m3 of natural gas and produces 140,000 tons of crude oil a year. Additionally, RAG was able to expand its exploration and production regions in recent years. RAG also operates outside Austria - in Bavaria, Hungary, Poland and the Ukraine. www.rag-austria.at