Natural gas to take us into the future 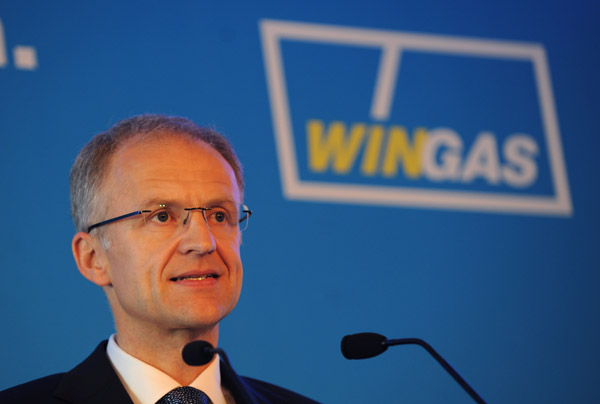 Salzburg/Kassel. WINGAS firmly believes in the growing importance of natural gas in the European energy mix. "A German and European energy mix that is fit for the future can only be secured if it includes a strong component of natural gas," WINGAS Chairman Dr. Gerhard König said confidently about the company's further development. WINGAS is one of the largest natural gas suppliers in Germany and is active in Belgium, the Netherlands, the UK, France, Austria, the Czech Republic and Denmark as well as on its home market Germany. "Natural gas is the fossil fuel with the lowest CO2 emissions and will play a key role in expanding renewable energies," König said at a press briefing by the company in Salzburg in the run-up to the commissioning of the second expansion phase of the Haidach natural gas storage facility. WINGAS has a share of a third of the storage facility nearby Salzburg. The WINGAS Chairman sees considerable growth potential in the future, especially in the power station segment. "Flexible gas-fired power stations are best suited to balancing out the fluctuations in electricity generation from wind and solar energy." Despite the current situation on the natural gas markets, which are characterized by a surplus of supply and great volatility of energy prices, the company was once again able to attain record sales in 2010.

Last year overall the WINGAS achieved considerable growth of over five percent with sales of 323.6 (2009: 308) billion kWh. "Particularly in Germany, where we increased sales by nine percent, we were able to attain stronger growth than the market," the WINGAS Chairman explained. Deliveries to customers on the German market totaled 184.4 billion kWh. The company now has a market share in Germany of about 20 percent in Germany. "As well as benefiting from the brightening of the economic outlook, we also profited from the cold weather during the winter months. But we also managed to close many contracts with new customers," Dr. König explained.

In its foreign markets WINGAS achieved a small increase from 138.7 to 139.2 billion kWh. WINGAS had achieved growth on the European markets as well as in trading on the international spot markets, the Chairman remarked. The company's turnover fell from 7.599 billion in 2009 to 6.862 billion euros. Profit from operating activities (EBIT) fell on the previous year's figure, primarily owing to the transfer of the gas pipeline network to its subsidiary WINGAS TRANSPORT, from 392.3 million to 284.6 million euros. Profit after taxes rose from 255.7 million euros to 302.6 million.

"Our business is and remains geared towards growth. 2011 looks set to be a challenging year," the WINGAS Chairman said regarding the prospects for the current financial year. With the growing significance of the spot market, the increasingly fierce competition and the integration of the European energy markets, the demands placed on gas companies are also increasing.

In the first quarter of 2011 natural gas sales decreased in Germany as a whole by about 10 percent on the previous year because less heating was required during the relatively mild winter. WINGAS was also affected by this trend. In 2011 the company expects to almost match the previous year's sales - despite the continued intense competitive pressure and the unusually cold winter in the winter months of 2010. Turnover is expected to increase slightly as a result of the higher gas prices triggered by the increase in oil prices. "We will continue on our growth course - and we will remain profitable," König announced.

The company also plans to strengthen its European activities. "We now generate over 40 percent of our sales outside the German market," König underlined. "We want to increase this segment. We are therefore taking a close look at new sales markets." WINGAS has already successfully entered the Dutch market. From 2012 the company will supply the third-largest Dutch energy supplier Eneco Holding N.V. with up to one billion cubic meters of natural gas (around 10 billion kWh) a year. "This large-scale supply agreement provides the foundations for achieving our objective of further growth in the Netherlands," the WINGAS Chairman explained. WINGAS plans to mirror the developments in Belgium in the Netherlands, gradually building up sales, and is aiming for a market share of around 10 percent by 2020. "The development in the Netherlands is a blue print for the continued expansion of our European activities," the Chairman of the gas supplier emphasized.

"Europe's own production of natural gas will decline significantly in the next few years while demand continues to grow. For this reason, securing the procurement side of operations is a cornerstone of our corporate strategy," König went on. WINGAS meets its demand primarily by means of long-term supply agreements. About 50% of the contracted volumes are supplied by OOO Gazprom export. The supplies from Russia are supplemented with gas from the North Sea. WINGAS has also increasingly taken advantage of the procurement possibilities of the Western European spot markets, such as the British National Balancing Point (NBP) or the Zeebrugge Hub in Belgium. This allows WINGAS to profit greatly from the favorable pricing structures on the spot markets.

For the WINGAS Chairman, the ready availability of natural gas, the public's acceptance of this source of energy, and in particular the extensive infrastructure are clear advantages for natural gas when it comes to shaping the future energy supply: "Storage facilities and transport are the key to a sustainable energy revolution. Wind and solar energy need storage facilities and networks. And our industry has already built these," König explained.

"We are bringing real added value to the partnership with renewable energies thanks to our network and storage facilities. It is not just natural gas and biogas that can be transported and stored with the gas network; but also solar and wind energy in the form of methane gas. "In other words our infrastructure is evolving into a general energy storage system for Europe," König explained. With the gas storage facilities in Rehden in North Germany, Haidach in Austria and the Jemgum storage project on the German-Dutch border, WINGAS is one of the largest storage providers in Europe.

Investments must be worthwhile

The natural gas company is driving forward the expansion of the European infrastructure: the Haidach natural gas storage facility was developed in recent years together with Rohöl-Aufsuchungs Aktiengesellschaft (RAG) and OAO Gazprom. Following the recent expansion phase, the second-largest storage facility in central Europe now has a capacity of over 2.6 billion cubic meters. In Jemgum storage operations will begin in two years - construction of the first caverns began at the start of the year. König: "Construction of the OPAL pipeline is also on schedule. The last welding seam will be completed in the next few days, which means the pipeline can come on stream as scheduled in autumn together with the Nord Stream Baltic Sea pipeline." Construction of the North European Gas Pipeline, NEL, which will transport the gas arriving through Nord Stream to north-west Europe, commenced in March. This project is scheduled for completion in autumn 2012. The pipeline project is being realized with Dutch company Gasunie and E.ON Ruhrgas. In addition, the Belgium gas transport company Fluxys will acquire a share in NEL. Around 1.7 billion euros are being invested by WINGAS in the next four years to expand the infrastructure.

"We are taking on a considerable entrepreneurial risk with these investments," the WINGAS Chairman explained. "But such investments are at stake because of the frenzy of German and European regulations." König thus called for an energy policy geared towards Europe's interests and a functioning internal market: According to König, the second single market package was being compromised by implementation deficits on the part of national governments. Despite all the protestations to the contrary, there was effectively no energy single market in Europe.

WINGAS is one of Germany's largest suppliers of natural gas. The energy company is active in natural gas trading across Europe: in Belgium, the Czech Republic, Denmark, France, the Netherlands and the UK. Its customers include municipal utilities, regional gas suppliers, and large-scale industrial users. WINGAS companies also market transport, storage and fiber-optic capacities and operate gas pipelines and storage facilities. Since 1990 the Group has invested more than 3 billion euros in the development of a natural gas transport and storage infrastructure. Its storage facilities make the WINGAS Group one of the largest storage facility operators in Europe. This includes the natural gas storage facility in Rehden in North Germany, which is the largest natural gas storage facility in Western Europe. The pipeline network of the subsidiaries WINGAS TRANSPORT GmbH and OPAL NEL TRANSPORT GmbH, which stretches over 2,000 kilometers, connects the major gas reserves in Siberia and in the North Sea to the growing markets in Western Europe.