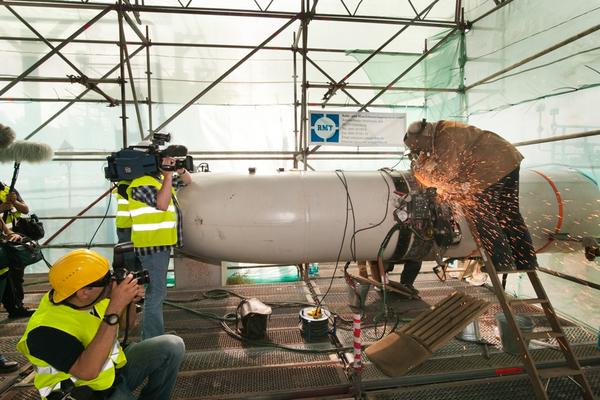 Lubmin. The direct link between the major Russian reserves in Siberia and the European natural gas market is in place: The first line of the Nord Stream Pipeline is now connected to the OPAL natural gas pipeline (Ostsee-Pipeline-Anbindungs-Leitung - Baltic Sea Pipeline Link). "The pipeline system is now ready for the next complex steps of bringing the pipeline on stream, which means we will be able to commission the first of the Nord Stream twin pipelines in the fourth quarter of 2011 as planned," Dr. Georg Nowack, Nord Stream AG project manager for Germany, explained. "The connecting pipeline OPAL, which will pick up the natural gas from Nord Stream and transport it onwards, is already complete," said Bernd Vogel, Managing Director of OPAL NEL TRANSPORT GmbH, a company of the WINGAS Group which will operate the connecting pipeline. "So we are ready. The Russian natural gas can come."

The last welding seam connecting the first line of the Nord Stream Pipeline and the OPAL pipeline was completed on the grounds of the natural gas transfer station in Lubmin near Greifswald, where the Nord Stream Pipeline reaches the German coast. Over 200 staff from regional and national companies are currently working on the 12-hectare piece of land near the Lubmin port preparing the transfer station for subsequent operations. Together the participating companies are investing around 100 million euros in Lubmin alone. In addition to OAO Gazprom, BASF subsidiary Wintershall Holding GmbH, E.ON Ruhrgas AG, Dutch company N.V. Nederlandse Gasunie and GDF SUEZ from France all hold a stake in Nord Stream. The WINGAS Group has an 80 percent share and E.ON Ruhrgas AG a 20 percent share in the connecting pipeline OPAL.

The OPAL natural gas pipeline was already completed more than a month ago. The pipeline has now been filled with gas and is ready to transport the Nord Stream gas onwards to the Czech Republic. A few days ago the first line of the 1,224 kilometre long Nord Stream Pipeline was connected at the landfalls in Russia and Lubmin. "The pipeline through the Baltic Sea has already been pressure tested, drained and dried and since August 22 completely filled with nitrogen, which serves as a safety buffer between air and gas," Nord Stream project manager Nowack explains. The next step is to gradually fill the pipeline with gas from Russia, and then the first line of the Nord Stream Pipeline will be ready for operation on time.

Other facts on the welding:

Nord Stream is a natural gas pipeline that will link Russia and the European Union through the Baltic Sea. The European Union's annual natural gas imports in the year 2008 were approximately 320 billion cubic metres (bcm) and are projected to increase to over 500 bcm by the year 2030. By then, the EU will need additional gas imports of 188 bcm per year (Source: IEA, 2011). Nord Stream will meet almost one third of this additional gas import requirement by connecting the European gas pipeline network to some of the world's largest gas reserves. The project will be an important contribution to long-term security of supply and a milestone of the energy partnership between the European Union and Russia.

Nord Stream AG plans to have the first of two parallel pipelines operational in 2011. Each line is approximately 1,220 kilometres long, providing a transport capacity of some 27.5 bcm per year. Full capacity of about 55 bcm per year will be reached when the second line goes on stream. This is enough gas to supply more than 26 million European households.

WINGAS is one of the largest suppliers of natural gas in Germany. The energy company is active in natural gas trading and distribution in Germany, Belgium, France, Great Britain, Austria, the Czech Republic and Denmark. Its customers include municipal utilities, regional gas suppliers, industrial firms and power plants. WINGAS companies also market transport, storage and fiber-optic capacities and operate gas pipelines and storage facilities. Since 1990 the WINGAS Group has invested about 4 billion euros in developing the energy infrastructure. Its storage facilities make the WINGAS Group one of the largest storage facility operators in Europe. This includes the natural gas storage facility in Rehden in North Germany, which is the largest natural gas storage facility in Western Europe. The pipeline network of the subsidiaries WINGAS TRANSPORT GmbH und OPAL NEL TRANSPORT GmbH, which is about 2,700 kilometers long, connects the major gas reserves in Siberia and in the North Sea to the growing markets in Western Europe.

OPAL NEL TRANSPORT GmbH will perform the tasks of network operator for the OPAL natural gas pipeline. It is part of the WINGAS Group. The company plans to connect the OPAL to the WINGAS TRANSPORT gas pipeline network.

E.ON Ruhrgas, based in Essen, is one of Europe's leading gas companies. Within the global E.ON Group, it is responsible for the pan-European gas business. The E.ON Ruhrgas Group employs about 3,200 staff. In 2010 the company supplied 757 billion kWh of gas to its customers, which include local and regional energy suppliers, industrial clients and power stations. The gas pipeline network, which covers about 12,000 kilometers, contains 17 underground storage facilities at 15 locations in Germany and Austria with a working gas capacity of approx. 8 billion cubic meters.