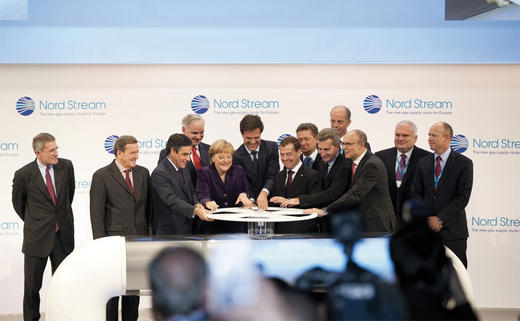 The heads of government and other political and business leaders were among the 500 guests who gathered today at Lubmin on Germany’s Baltic Sea coast for a formal ceremony to celebrate the arrival in Europe of gas through the Nord Stream Pipeline. The celebrations were led by the heads of the four countries whose companies are shareholders in Nord Stream, EU Commissioner Oettinger as well as the heads of the shareholder companies.

Nord Stream’s five shareholders Gazprom, BASF/Wintershall, E.ON Ruhrgas, Nederlandse Gasunie and GDF SUEZ all echoed the heads of government in hailing the significance of the Nord Stream Pipeline for long-term energy security. Nord Stream is providing this key energy infrastructure on schedule and on budget, at no cost to European taxpayers: the consortium’s five shareholders are shouldering 30 percent of the 7.4 billion euro investment, with commercial loans from a group of almost 30 international banks covering 70 percent.

Together, the political and business leaders inaugurated the pipeline, which provides a fixed link for at least 50 years between Europe’s gas markets and Russia’s vast gas reserves. The formal ceremony was held next to the site in Lubmin where the Nord Stream Pipeline is connected to the European gas grid, specifically to the onshore pipelines OPAL and NEL.

“Nord Stream has provided Russia’s Gazprom with a safe, modern and efficient additional route through which to supply gas to its partners and customers in the EU, in addition to the existing transit routes through Ukraine and Belarus,” said Matthias Warnig, Nord Stream Managing Director. Nord Stream is a commercial project based on long-term contracts by Gazprom Export to supply customers in Germany, Denmark, the UK, the Netherlands, Belgium, France, the Czech Republic and other countries.

“This new fixed link between Russia and the EU is one of the long-term solutions for the EU’s energy security,” Mr Warnig added. All experts agree that Europe faces a long-term shortfall in gas supplies: the International Energy Agency sees natural gas becoming the most important fuel in the EU energy mix by 2030, but domestic gas production is declining. “To help meet this long-term increase in demand for gas imports, our shareholders have committed to this long-term solution, creating a fixed link for at least 50 years between European markets and Russia’s massive gas reserves,” Mr Warnig added.

Before starting construction in April 2010, Nord Stream invested 100 million euros in the most comprehensive research of the Baltic Sea ever in planning the pipeline, and consulted widely to ensure that the design, routing, construction and operation of the pipeline will be safe and environmentally sound. Nord Stream is investing a further 40 million euros in comprehensive environmental monitoring along the route through the Baltic Sea to guarantee that the environment is not adversely affected.

Nord Stream is a natural gas pipeline that links Russia and the European Union through the Baltic Sea. The European Union’s annual natural gas imports in 2008 were approximately 320 billion cubic metres (bcm) and are projected to increase to over 500 bcm by 2030. By then, the EU will need additional gas imports of 188 bcm per year (Source: IEA, 2011). Nord Stream will meet almost one third of this additional gas import requirement by connecting the European gas pipeline network to some of the world’s largest gas reserves. The project will be an important contribution to long-term security of supply and a milestone of the energy partnership between the European Union and Russia.

The first of Nord Stream’s two parallel pipelines became operational in November 2011. Each line is approximately 1,220 kilometres long, providing a transport capacity of some 27.5 bcm per year. More than 65 percent of Line 2 has also already been laid. Full capacity of about 55 bcm per year will be reached when the second line goes on stream in late 2012. This is enough gas to supply more than 26 million European households.

Construction of the Nord Stream Pipeline started in April 2010, after completion of environmental studies and planning and an Environmental Impact Assessment (EIA) along the entire pipeline route. Three pipelay barges have been commissioned to work on the project: Saipem’s Castoro Sei is carrying out the majority of the construction in the Baltic Sea. The Castoro Dieci has completed its operations in German waters, where it constructed both pipelines in the German landfall section; Allseas’ Solitaire handled construction in the Gulf of Finland as a subcontractor of Saipem. The first pipeline became operational in 2011, the second one is scheduled to become operational in 2012.

In 2010, Nord Stream invested 13 million euros in its Environmental and Social Monitoring Programme (ESMP). More than 20 specialist companies are conducting the surveys defined in the ESMPs, to determine just how, and if, the Baltic Sea’s flora and fauna have been impacted by the construction of the Nord Stream pipelines. Data from sixteen subjects, including water quality, bird, fish and mammal populations, as well as seabed recovery, are collected from approximately 1,000 survey locations along the route in the waters of Russia, Finland, Sweden, Denmark and Germany. These data are analysed in internationally recognised laboratories, and Nord Stream reports the results to the national environmental authorities in each country. Nord Stream plans to invest approximately 40 million euros into its ESMP to monitor any impact of the construction and operation of the pipelines through 2016.