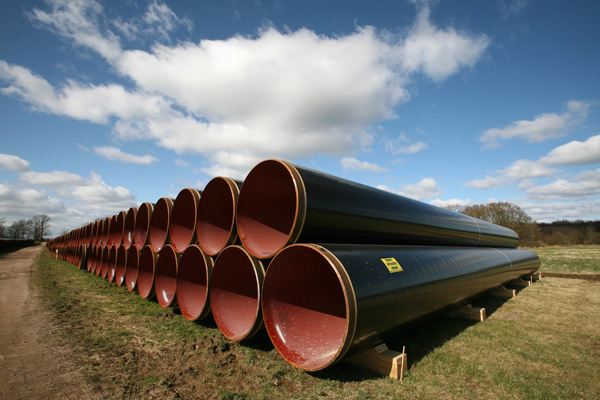 Kassel. Work on building NEL, the North European Natural Gas Pipeline, got up and running over the last few days. The 440 kilometer pipeline is planned to be completed by fall 2012. The pipeline developers are WINGAS GmbH & Co. KG, the Dutch gas distribution network operator, Gasunie, and E.ON Ruhrgas AG. Fluxys, the Belgian gas distribution network operator, will probably also have a holding interest in the future. NEL and the OPAL Baltic Sea connection pipeline, which is nearing completion, will be used for the onward transport of natural gas from the Nord Stream Baltic Sea pipeline. It will bring the gas to customers in Germany, Denmark, the Netherlands, Belgium, France and the UK. For Michael Muth, Chief Construction Manager at WINGAS, experiences gained from the OPAL construction also bring benefits: "We are now beginning simultaneously with the work in all construction sections, and will certainly move forward swiftly," he explains.

The pipeline will stretch from the Nord Stream landing point near Lubmin, 240 kilometers across Mecklenburg-Western Pomerania, and then another 200 kilometers through Lower Saxony to Rehden. The natural gas from Russia can then be stored in the gas storage facility here, or fed on into the Western European pipeline network. The line has a transport capacity of approx. 20 billion cubic meters of natural gas, which is more or less a fifth of the annual German requirement. It therefore closes a gap in the European natural gas transport infrastructure, which will increase further in importance, as explained by Bernd Vogel, Managing Director of the network operator, OPAL NEL Transport GmbH: "The two connection pipelines, NEL and OPAL, are important connections to customers across the whole of Europe, and together with the Nord Stream pipeline they also increase supply security in Germany and Europe."

Experts from the respective regional authorities checked the route in advance for possible archaeological discoveries. Ordnance disposal specialists will also conclude their work in the coming days. The valuable topsoil on the sections of the route that are approved for construction work will first be secured so that it is not mixed with the infertile lower soil when filling in the pipe trench. The pipes already lying in wait will then be transported from the storage points to their individual sections. Special vehicles, whose extra wide tires prevent any excessive compacting of the ground, are deployed for this. The pipes are then prepared on site by specialist companies for welding and laying.

WINGAS is one of Germany's largest suppliers of natural gas. The energy company is active in natural gas trading across Europe: in Belgium, the Czech Republic, Denmark, France, the Netherlands and the UK. The WINGAS companies also market transport, storage and fiber-optic capacities and operate gas pipelines and storage facilities. Its storage facilities make the WINGAS Group one of the largest storage facility operators in Europe. The pipeline network of the subsidiaries WINGAS TRANSPORT GmbH and OPAL NEL TRANSPORT GmbH, which stretches over 2,000 kilometers, connects the major gas reserves in Siberia and in the North Sea to the growing markets in Western Europe.

Gasunie is a European gas infrastructure company. Our network ranks among the largest high pressure gas pipeline grids in Europe, consisting of over 15,000 kilometers of pipeline in the Netherlands and northern Germany. Gasunie is the first independent gas transport provider with a cross-border network in Europe. We offer transport services via our subsidiaries Gas Transport Services B.V. (GTS) in the Netherlands and Gasunie Deutschland GmbH in Germany. We also offer other services in the gas infrastructure field, including gas storage and LNG. In relation to expanding international gas flows, the Gasunie network forms the core of what is called the North West European "gas hub."

E.ON Ruhrgas, based in Essen, is one of Europe's leading gas companies. In the E.ON Group operating worldwide, it is responsible for pan-European gas business, providing markets across Europe with gas. The E.ON Ruhrgas Group employs over 3,800 staff. In 2009 the company supplied 711 billion kWh of gas to its customers, which include local and regional energy suppliers, industrial clients and power stations. The gas pipeline network, which covers over 12,000 kilometers and contains 28 compressor stations, is operated by its subsidiary Open Grid Europe. The 15 underground storage facilities at 13 locations in Germany and Austria with a working gas capacity of approx. 6.4 billion cubic meters are operated by E.ON Gas Storage.

You will find more information at www.nel-pipeline.de.