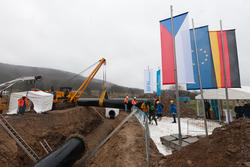 Olbernhau/Brandov. The closer cross-border integration of national natural gas pipeline systems called for by the European Union has tak en a key step forward: the laying of the natural gas pipeline OPAL, which will transport natural gas from the Nord Stream Baltic Sea pipeline onwards to European customers, has now crossed the German-Czech border in the Ore Mountains near Olbernhau in Germany and Brandov in the Czech Republic. The 470-km-long pipeline will be connected to the Czech natural gas transport system here. "By building the Nord Stream pipeline and its connecting pipeline OPAL, European customers are gaining direct access to the major Russian natural gas reserves in Siberia. This will strengthen the energy supply in Europe long-term," Bernd Vogel, Managing Director of OPAL NEL TRANSPORT GmbH, explained as the border river Natzschung was crossed. The company is part of the WINGAS Group and will perform the tasks of network operator for OPAL (Ostsee-Pipeline-Anbindungs-Leitung - Baltic Sea Pipeline Link). With an annual transport capacity of 36 billion cubic meters and a diameter of 1.4 meters, OPAL is the largest natural gas pipeline to be laid in Europe.

"Direct links between national natural gas pipeline systems such as this one on the German-Czech border not only secure the energy supply in the European Union; indeed, cross-border connections between the national systems allow the European energy market to become more integrated, which will help fulfill the wish and original aim of policy-makers to boost competition," Hartmut Fiedler, State Secretary at the Saxony Ministry for Economics, Work and Transport, said praising the construction of the natural gas pipeline. Furthermore, the Free State was benefitting directly from an infrastructure project of this magnitude, he added. "Saxony has a strong and modern energy industry. The OPAL pipeline will strengthen Saxony's role as a central hub of the energy sector in Germany and Europe even more." The WINGAS Group has been active in Saxony since the beginning of the 1990's. In the last 20 years, more than 200 million euros have been invested in the pipeline system through Saxony. The STEGAL (Sachsen-Thüringen-Erdgas-Leitung) natural gas pipeline with the compressor station in Olbernhau was commissioned in 1992; the JAGAL pipeline (Jamal-Gas-Anbindungsleitung) was constructed in 1999.

Crossing the Natzschung is another milestone of the OPAL project

"In crossing the border river Natzschung and connecting to the Czech natural gas transport system, the construction of OPAL has reached another milestone," Bernd Vogel underlined. "This makes us confident of completing the pipeline by the late summer 2011 as planned and bringing it online in October 2011 together with the first Nord Stream pipeline." 400 kilometers of the overall length of 470 kilometers have already been laid, and the welding together of the more than 26,000 pipes has also largely been completed. "In Saxony and in Mecklenburg-Vorpommern we want to finish the pipe-laying work by the end of the year," Michael Muth, Chief Construction Manager at WINGAS, added. In Brandenburg, the longest section, over 200 kilometers of pipeline have already been laid. Muth: "The work in the next few months will concentrate on the construction of the gas transfer station in Lubmin and the natural gas compressor station in Baruth, south of Berlin, as well as completing the numerous road crossings and recultivating farm lands." The gas has to be compressed, i.e. the pressure increased, in order to transport it over the entire 470 kilometers - a process which takes place in a compressor station.

You can follow the progress of the OPAL construction work with the video diary "Live from the track" on the Internet at www.opal-pipeline.de or on the YouTube channel www.youtube.com/OPALPipeline.