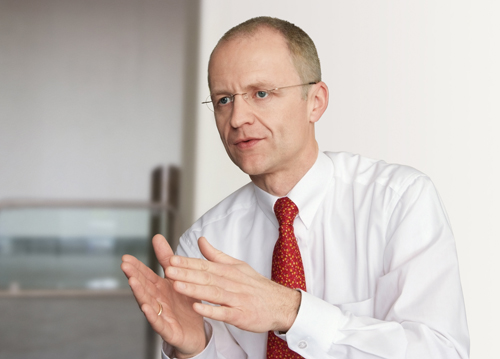 Dr. König: “Enterprises are willing to make investments” | Politics must acknowledge the significance of the “green” fuel natural gas

Brussels.  In order to enhance security of energy supply in Europe, a reliable political framework must be established. This request was expressed by Dr. Gerhard König, speaker for the management of WINGAS, at the international energy forum entitled “Challenges of a Comprehensive European Energy Policy” on Wednesday, 3 March 2010 (today) in Brussels. “Security of energy supplies for markets is the real challenge of the 21st century,” Dr. König said at the expert conference. “However, investments aimed at securing energy supplies require a reliable framework. I am not talking about the increasing regulation that restricts the scope of entrepreneurial action. I am arguing for a framework that provides long-term investment security.” Although energy companies are basically willing to make further investments in the expansion of the European supply system, the right political signals are missing at the moment. Dr. König continued: “The excellent infrastructure existing in Germany was mainly built on private-sector initiative. Increasing over-regulation and more bureaucracy will probably cause more harm than benefit.” Europe’s gas imports will continue to rise significantly by the year 2020. The increase is expected to amount to up to 80 billion cubic meters of natural gas per year, thereby exceeding the existing and during this period still increasing import contracts. Therefore it is necessary to build the additionally needed transport capacities. WINGAS Group is planning to further expand its gas pipeline system with investments worth about three billion euros by 2015.

Dr. König emphasized that the existing storage and network infrastructure in Western Europe had proved to be effective during the transit crisis between Ukraine and Russia in winter 2009.  “However, in order to secure the supply in the future it is necessary to make this infrastructure more robust – by means of additional gas storage facilities, by connecting our East European neighbors to the West European network and by building transit-independent supply routes such as the Nord Stream pipeline through the Baltic Sea.” According to Dr. König, the establishment of a direct connection with Siberia’s natural gas reserves will be a major contribution to securing gas supplies in Germany and the European Union. As from 2012, 55 billion cubic meters of natural gas per year are to be delivered to the German Baltic Sea coast and transported through pipeline links to clients in Western Europe. “The volume of 55 billion cubic meters that will flow through the pipeline is equivalent to 55 coal-fired power stations or 20 new nuclear reactors“, thus the Chairman of the energy company based in Kassel outlined the significance of the project.

Gerhard König holds the opinion that a strong private business sector is of crucial importance for energy security in Europe. “The European gas companies are the ones that secure energy supplies for their clients in Europe: Gas companies work on the basis of long-term supply contracts with flexible provisions. Moreover, they already cooperate as partners across national borders and last but not least some of them are directly involved in production activities in supplier countries. It is gas from our own production that secures energy supply in Europe.” WINGAS Chairman Dr. König takes it for granted that there will be great demand for natural gas in Europe. He expects that the rising demand for gas will be mainly due to electricity generation. “Compared to other fossil fuels, natural gas emits much less CO2 and therefore ensures a climate-friendly future”, Dr. König emphasized before the audience in Brussels. He added that only the use of natural gas will enable us to achieve the goal of a “healthy growth”. Moreover, natural gas is an important partner of renewable energies. “Only the concurrent use of natural gas ensures the safety of renewable energies. Neither solar nor wind energy can be stored, whereas natural gas can be stored. Therefore it can be used to balance out fluctuations in renewable energy generation,” Dr. König said and he added the request: “Politics must at last acknowledge, accept and promote the significance of natural gas as a green fuel and as a partner of renewable energies.“