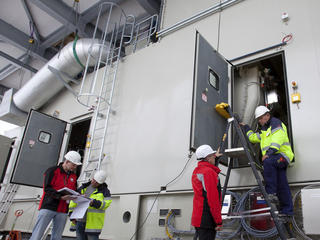 WINGAS and E.ON Energy Projects are investing in energy efficiency: the two companies are building a highly efficient combined heat & power (CHP) plant together at the landing terminal of the Nord Stream Baltic Sea Pipeline in Lubmin near Greifswald. The partners have now set up the project company Industriekraftwerk Greifswald GmbH to build and operate the plant. The pipeline is expected to be completed at the beginning of 2013 and then produce electricity as well as heat.

The CHP plant will have a useful heat output of about 47 MW as well as an electric capacity of about 37 MW. A gas turbine will generate the electricity with the help of a generator. The waste heat generated in the gas turbine will be used directly for preheating gas via a heat exchanger. In peak times up to 200,000 megawatt hours of electricity a year will be generated – enough to supply 50,000 households for one year.

Heat is needed in Lubmin because the gas arriving through the Baltic Sea pipeline has to be warmed in Lubmin after its long journey through the Baltic Sea before being transported onwards over land. The high efficiency of the plant with a utilization rate of more than 85% of the energy used is a result of the combined generation of electricity and heat, which means the plant saves on 40,000 t CO2 a year. The electricity produced is fed into the main electricity network, and the waste heat is used at the landing terminal itself.

“No other technology can achieve efficiency rates like this so quickly. The CHP plant is an example of the contribution natural gas and natural gas technologies can make to the success of the energy turnaround,” WINGAS Chairman Gerhard König explained. “CHP plants support a low-carbon energy supply in combination with renewable energies,” König continued. They do not have fluctuating generation rates and they have high efficiency rates. Efficiency in particular is all too often neglected in the energy turnaround. “You will not find a more efficient partner for renewable energies,” König said.

“Distributed energy resources are an integral part of the energy turnaround in Germany. With this plant we are not only contributing to efficient and decentralized electricity generation, we are also ensuring the smooth transport of environmentally-friendly natural gas,” Ingo Luge, CEO of E.ON Deutschland said. “We will continue expanding the generation of heat and electricity with the help of this proven and efficient CHP technology in future too,” Luge continued.


WINGAS is one of the largest suppliers of natural gas in Germany. The energy company is active in natural gas trading in Belgium, Denmark, France, the UK, Austria, the Netherlands and the Czech Republic. Its customers include municipal utilities, regional gas suppliers, industrial firms and power plants.

E.ON Energy Projects implements electricity and heat generation solutions for industrial customers. The company develops made-to-measure concepts, builds and finances the plants and then operates these together with the customers. E.ON Energy Projects has installed projects with an electrical output of over 1.600 MWel to date or has played a key role in realizing the projects.