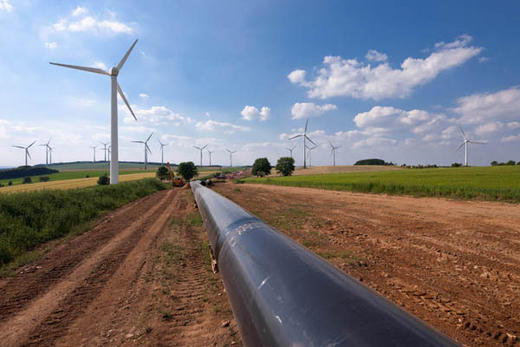 Experts consider the German energy turnaround a blueprint for the EU energy system. | European governments criticized across the board for their national energy policies. | The majority of German experts view Russia as a reliable energy supplier.

Berlin. Experts across Europe see the German energy turnaround as a possible model for the EU energy system, with natural gas playing a central role. These are two of the main results of the expert monitors’ survey on natural gas, which TNS Emnid conducted on behalf of WINGAS, asking 100 experts each from Germany, Austria, the Netherlands and Belgium. The representatives from the energy industry, research and associations gave their views on energy policy in response to these questions: In which direction is the energy system developing? How is the German energy turnaround viewed in other European countries? How important should natural gas be in the energy mix of the future? Which countries can be considered as possible reliable energy suppliers for the EU? The answers to these and other questions were presented today in Berlin.

Energy turnaround: a model for Europe
The experts interviewed expressed more than just great interest in Germany’s energy concept; there is a high level of approval across the board too: 84 percent of those asked Europe-wide consider the energy turnaround sensible. Accordingly, about three quarters of the European experts (76 percent) see the direction of Germany’s energy policy as a blueprint for the EU energy system. What is notable in this regard, however, is that the German experts are the most sceptical regarding this question: while 81 percent of the specialists in Austria are in favor of transferring the objectives of the energy turnaround for renewable energies and nuclear power to the EU level, in Germany this figure is just 67 percent.

For WINGAS Chairman Gerhard König, this reservation can be explained by their actual experience: "With the energy turnaround in Germany, we are currently undergoing an experiment which is not without any problems or difficulties. In particular energy prices, social justice, but also supply security are issues that directly affect and cause concern for the people in Germany." For example, 41 percent of the German experts fear that the energy turnaround will have a negative impact on supply security.

European governments get bad marks for their energy policies
The governments were given negative assessments across the board by the experts for the concrete implementation of their national energy policies: For instance, 71 percent of the Germans interviewed described the current energy policy of the federal government as rather poor or very poor: two thirds of the experts asked in Austria (66 percent), the Netherlands (73 percent) and Belgium (60 percent) are of the same opinion regarding their own domestic energy policies.

The survey also revealed there was broad consensus among the experts regarding the question of which conventional energy source best complements renewable energies in terms of environmental friendliness, climate protection and supply security: with an average approval rate of 52 percent across the countries, natural gas won out clearly over the other energy sources: coal, for example, was only named by five percent. In Germany the votes in favor of natural gas even reached 84 percent.

WINGAS Chairman König: “The results of the expert monitor show that natural gas will have to play a central role in the future energy architecture. Otherwise the energy turnaround is at risk of failing.”

Majority of German experts view Russia as a reliable energy partner
In view of the overall positive forecasts for natural gas, the question of which supply region should be considered as a possible reliable EU energy partner is very important. Opinions diverge when it comes to rating the reliability of Russia as a supplier, currently the most important natural gas supplier for the EU. Indeed, there is a clear discrepancy between the experts in the different countries. What is particularly surprising is that Russia is seen as almost equal to North Africa or the Caspian Sea region in terms of reliability in Austria (38 percent), the Netherlands (19 percent) and Belgium (26 percent). In Germany, on the other hand, the experts’ view is much more positive: here 52 percent rate Russia as a reliable partner.

For Gerhard König, this greater level of acceptance is also attributable to WINGAS: “The energy partnership between Germany and Russia is a solid one and benefits both sides. Russia and Gazprom are reliable energy partners. WINGAS has been successful and reliable on the market for 20 years as a joint venture of Wintershall and Gazprom. The success of WINGAS should be an example to policy-makers.”


More details and the results of the expert monitors’ survey on natural gas are available to journalists at presse@wingas.de or from the press hotline 0561/301-3301.

WINGAS is one of the largest suppliers of natural gas in Germany. The energy company is active in natural gas trading in Belgium, Denmark, France, the UK, Austria, the Netherlands and the Czech Republic. Its customers include municipal utilities, regional gas suppliers, industrial firms and power plants.