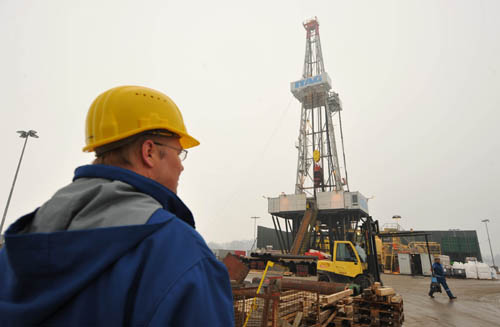 Jemgum. A natural gas storage facility is becoming reality: the energy company WINGAS has started the drilling work for the natural gas caverns in the salt dome in Jemgum, thus launching the main phase of the project to build the subterranean storage facility on the German-Dutch border. “In order to prepare the cavities for the subsequent gas storage in the salt dome, we have to drill to a depth of 1,600 meters,” Arkadius J. Binia, the man responsible for the storage project at WINGAS, explains. The drilling work will continue until 2012. “We have planned up to 18 caverns in total – and we have to drill a well for each cavern.” Two months have been set aside for each well. WINGAS envisages a working gas capacity of around 1.2 billion cubic meters of natural gas for the storage capacity in Jemgum. Several hundred million euros have been earmarked for the construction of the storage facility. The company plans to bring the first caverns on stream in 2013.

The drilling is being carried out from various locations on the storage grounds. “This is the only effective way to reach the deep geological structure,” the WINGAS Project Manager says. For once built, the caverns will be up to 400 meters high with a diameter of up to 80 meters. The Jemgum salt dome offers perfect conditions for natural gas storage: “The underground salt domes in the region make natural gas storage extremely safe thanks to their geological properties and a depth of more than four kilometers,” Binia explains. “In addition, there is barely another salt dome in North-West Europe that has been explored and examined at such depth. The other gas caverns that have been operated there for decades prove the suitability of the salt dome for gas storage.” Furthermore, Jemgum lies in a strategically advantageous position in the German and European gas network. Another advantage of the location is the direct proximity to the connecting pipelines to the large natural gas reserves in the North Sea and in Russia. After the drilling work, the so-called solution-mining process will begin. In this process water is taken from the Ems River and pumped into the salt dome. The salt then dissolves, leaving behind a cavity. The saturated salt solution generated in Jemgum, also referred to as brine, is then transported directly to the North Sea via a 40-km-long pipeline.   To build the natural gas storage facility WINGAS is cooperating with the energy company EWE AG from Oldenburg. The two companies plan to create up to 33 caverns in the Jemgum salt dome in the next few years. The storage facilities will be developed together by the two companies but operated separately following completion.