The objectives of the politically initiated merger of the two market areas GASPOOL and NCG are diverse. On the one hand, by standardising regulations, prices and tariffs, Germany’s gas trading hub should become more liquid and thus more attractive. This is also linked to the hope, that long-term hedging transactions will no longer have to be dealt with via the Dutch TTF as has been the case up to now. On the other hand, attempts that had already been seriously pursued with the aim of merging individual German market areas with foreign markets and which met with reservations on the part of German policymakers were stopped.

The German transmission system operators (TSOs) are obligated to implement the merger. Their analysis of the effects of the merger in the context of the „marco-project“ resulted in a conclusion that made the German gas industry sit up and listen. Compared to the situation applicable until September 2021, the level of freely allocable entry capacities (FAC) in the H-gas system would be greatly reduced. Due to the low physical exchange capacities between the existing market areas, without implementing further measures, only 22% of the capacity that guarantees uninterrupted access without restrictions to the virtual trading point (VTP) would be available. 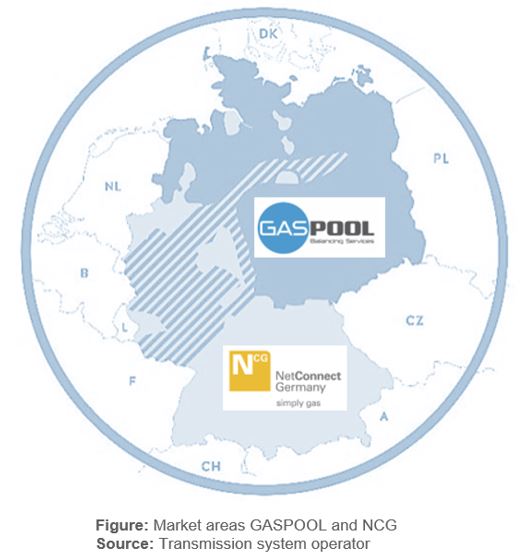 As a result of their analysis, the TSOs have also described measures which should ensure that the current level is maintained. Instead of a lengthy and expensive physical network expansion, so-called market-based instruments (MBIs) are introduced. Capacity bottlenecks should be prevented with the help of VIP-wheeling, third party network usage and the „spread-product“.

With the first two instruments, physical restrictions in Germany will be compensated with the aid of neighbouring foreign network operators by using network points and/or entire network sections. The „spread product“ has already proved its effectiveness in the context of the French market area merger. A virtual transport is generated by the simultaneous exchange-based buying and selling of trading quantities at various relevant points of the market area.

The buy-back of previously marketed capacities shall provide an additional instrument. Considered by the TSOs as the „ultima ratio“ (or the „last resort“) option if the other MBIs do not take effect, this measure, from the perspective of the Bundesnetzagentur (BNetzA), represents an absolutely essential element of the entire concept.

The procurement of the MBIs is organised centrally via the market area manager and is carried out in a cost-optimised manner. According to the TSOs, the total costs for using the various MBIs will amount to €30 million annually and will be passed on to national network charges. The MBIs should prove their functionality in the course of the test phase. In particular, evidence must be provided that their use is more efficient than a physical network expansion.

Market participants operating throughout Germany can profit from the future uniform regulations, as processes will be standardised thereby cutting costs. However, if the instruments that were developed to maintain the level of capacity fail to attain their expected effect, there is a danger that Germany’s gas market hub will miss the intended goals. Moreover, negative effects on liquidity and price level could result in the procurement of gas becoming more difficult and expensive for end customers than hitherto.

Planning security with regard to the long-term availability of FAC is essential to ensuring a functioning market. In view of the impending phasing out of nuclear and coal, a liquid gas trade hub is a necessary condition for the increasingly important competitive supply of gas power plants.