Natural gas is still a fundamental energy source on a global scale and will continue to play an important role in energy security and supply in the next few years.

Natural gas is an important energy source – also in the future
In direct comparison to coal and oil, the demand for natural gas will continue to rise in the medium term. Moreover, natural gas is not only relevant as an energy carrier, but also as an important raw material for the production of climate-friendly hydrogen. These are three key findings of the World Energy Outlook (WEO), which was published by the International Energy Agency (IEA) in October 2021.

The WEO 2021 shows that the global economy, includ­ing the energy sector, is recovering from the Covid 19 pandemic. The key indicators point to a positive devel­opment in direct comparison with the pre-crisis year 2019 a. o. for GDP, electricity consumption and demand for renewable energies and natural gas (with approx. + 1.5 percent as the only fossil energy source).

In the current version of the WEO, the IEA analyses the global energy sector and its development until 2050 on the basis of three scenarios. The so-called Stated Policies Scenario (STEPS) is based on the current political framework and objectives. In this scenario, a continuous increase in global energy consumption (by 26 percent by 2050 compared to 2020) is expect­ed, mainly caused by population growth, and rising economic output. The share of renewable energy sources is expected to increase in all scenarios. In the STEPS scenario, the IEA expects a share of 28 percent in 2050. 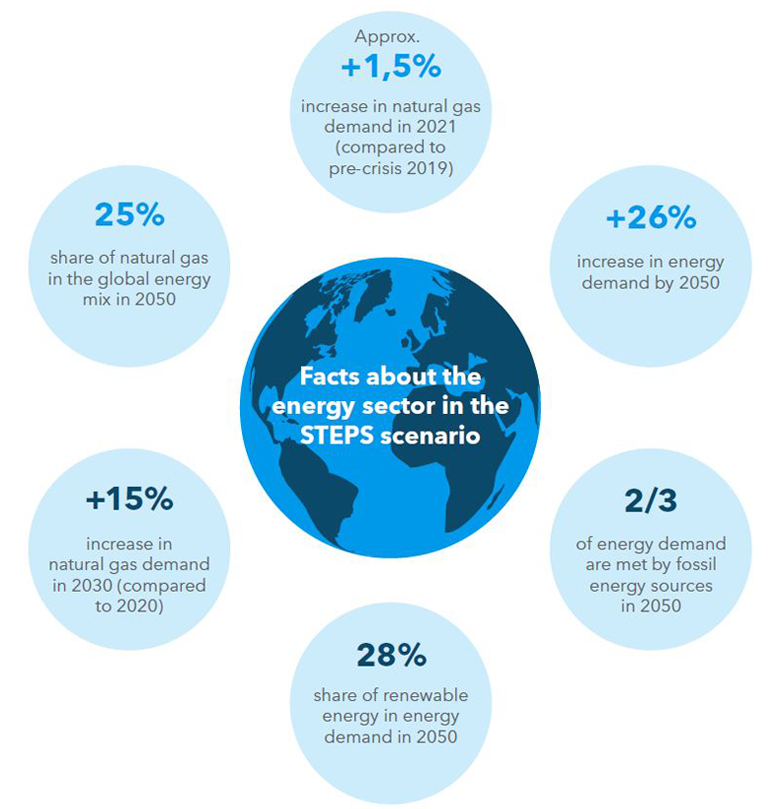 According to the IEA, the transition from coal to gas is a key factor for natural gas as an energy source. The potential varies by sector and region and depends on the speed and scale of the targeted emissions reduction. The transition from coal to natural gas (especially in the US and EU electricity sectors) has contributed to global emissions in 2020 being reduced by ca. 750 million tonnes of CO2 since 2010, according to the IEA.

• The Stated Policies Scenario (STEPS) is based on the current political framework and measures that have already been imple­mented and announced.

• The Announced Pledges Scenario (APS) bis based on the assumption that all announced net-zero emission pledges are met in full and on time.

In the STEPS scenario, the global increase in natural gas demand until 2030 is almost exclusively driven by emerging and developing countries. Demand in China is 40 percent higher in 2030 than in 2020. Europe sees a decline, while demand in North America peaks in the mid-2020s.

The IEA emphasises that in all scenarios, sufficient supplies of fossil and low-emission energy sources are crucial for maintaining energy security and reducing price volatility. In many countries, natural gas infrastructure is a critical factor for security of supply – both for heat and power generation to meet seasonal peaks in demand.

The WEO 2021 provides important and relevant insights into the future of the global energy market. Although the pace of development and expansion of renewable energy is picking up and will need to accelerate in order to achieve the common climate goals, fossil energy sources such as natural gas remain a fundamental part of the global energy architecture – especially when it comes to compensating for peaks in demand.

Additionally, natural gas can also make an important contribution to the energy of the future as a raw material for hydrogen. There are different scenarios for the long-term development of demand – depending on how consistently the members of the international community will translate their net-zero emissions pledges into concrete action. However, the question of how the large quantities of hydrogen needed worldwide can be produced, will also play an important role.

The current edition of the WEO and further information can be found online at: www.iea.org/reports/world-energy-outlook-2021.